When it comes early 21st century UK Indie bands I'd bet you don't get too far into the list before Bloc Party appear. Releasing their first studio album Silent Alarm in 2005 they stormed the charts and landed a Mercury Prize nomination. Since then we've had a raft of albums and mixed tapes from them, each time we're offered an array of talent and varying degrees of Electronica, Alt Dance, Post Punk & Indie.

At the front of Bloc Party stands Kele Okereke, he's one of those Artists whose voice you can spot a mile off, whether that be on Bloc Party, his solo work or featuring with Trance or EDM legends such as Tiesto and Chemical Brothers.

Throughout the last 15years Kele has treated us to a whole raft of albums, and as mentioned this isn't the first solo album from him. He's previously released albums under the mononym Kele during the gaps between Bloc Party Albums, as well as a few tracks under Kele Okereke in 2014.

Fatherland is the first Studio Album released under the name Kele Okereke, I wonder if the reason for the name change is due to the change in style. If you're looking for an album synonymous to the Oscillating Audiogasms of Silent Alarm or A Weekend in the City then this isn't going to satisfy those ear drums.
Even Bloc Party's most recent album Hymns, which took a slow down in pace, is far from Fatherland. 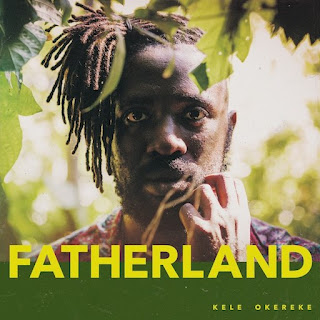 So what about Fatherland? Kele's put down the Synthesisers and Modeller Pedals, moving away from the electro punk pace, replacing them with simple Folk acoustic sounds. In fact the entire album is Kele with an acoustic guitar and mellow drums - occasionally featuring an additional instrument such as a Piano, Saxophone or Violin.

The only electro feel within the entire album is the keyboards and slightly lifted pace of Grounds For Resentment which features Olly Alexander (of Years and Years). On the lines of additional vocals Fatherlands also lends vocals from Corinne Bailey Rae on track Versions of Us.

It feels as if this whole album is telling us a story the name change, the sound change and the image change and that's before we even listen to the first lyrics. This is a story of romance and affect of time, influenced by the birth of his daughter according to Kele. It features a story of his relationships with his long term boyfriend, family & heritage.

As the album moves through it shows the rollercoaster of life and romance. Happy upbeat new relationships the woo-ing and passion. See 'Do U Right' my personal favourite from the album, fairly upbeat and fun. To Savannah an ode his daughter.

Fatherland the story of an Indie rockstar of Nigerian & Catholic background in a same-sex relationship having his first born (not that you can simplify a man down to a few basic facts), Kele has always been somewhat shy and unforthcoming with the media, but I think this album brings humanity and complexity to the surface.

Fatherland is a testament to Kele's life and his abilities as a performer to tell a story in such a long way from his usual style. It's new, it's different, it's good!

I still can't help but feel I want more rhythmic guitar and electro punk though!

As I lay writing this from a hotel in Dusseldorf, nodding asleep & knackered! 24 hours previous I'd be knocking back a tequila and 2 songs deep into Beth Ditto's solo set. The end of her 6 week tour, in Albert Hall Manchester.


I certainly know why, despite being due up for a flight to Germany at 4am the next day to conduct a 2 day training course, I thought it would be a good idea to go see the one and only Beth Ditto, of Gossip fame.

I pushed back the travel and at several points almost cancelled going to the gig. I'm so glad I didn't! (Shout out to the European teams at ao.com for accommodating my Gig plans)

This has been the best show in a while at Albert Hall. And this month alone I saw both Placebo and Interpol, unfortunately those times they oversold and we were crammed in. Beth Ditto, having moved the venue from Gorilla, was slightly less packed - and it made for a good gig. 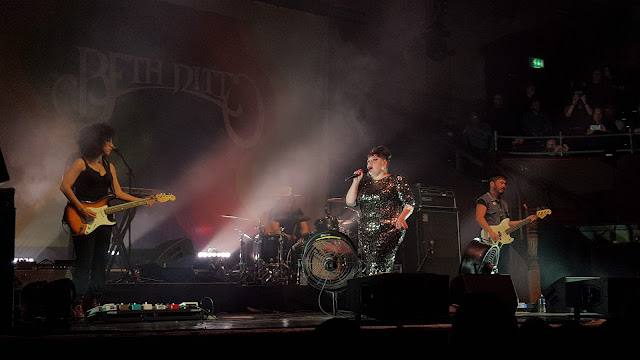 Having recently disbanded from long time band Gossip, Beth released her solo album Fake Sugar. To be honest
after her EP in 2011 we knew this album was going to be great! C'mon... I Wrote The Book, she wrote the whole damn library.

Venturing away from the Punk/Post-punk sound shes moved into cross genres from Alt, Indie to Country. Love it, and that was very evident Beth was eager, and anxious, about the reception she would receive, and we did not disappoint... Beth must have said Thank You 100 times, but Thank You Beth! 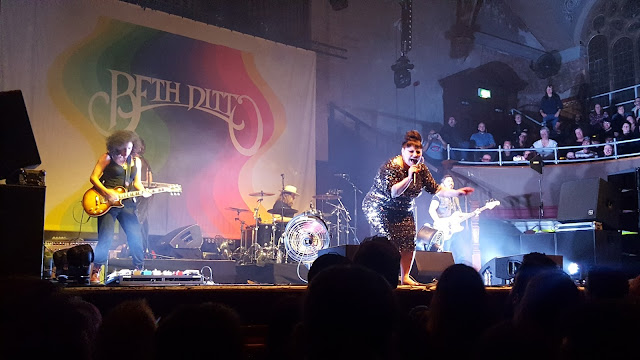 Starting off with Oh My God, much of the first half was Fake Sugar songs, with the early EP chucked in for good measure. You can't fault her vocals or the band, they we're spot on and perfect all the time.

What makes Beth Ditto great is her audience interactions, a good 25% of the gig is the Beth Ditto talk show. From stories of anxiety after Gossip, to jokes about her 'English Family' in the VIP section. She spent so much time waving and reach out to people she knew, Instagrammers she'd spoken too. This was the first time in a long time I'd seen someone for the crowd more than themselves.

The only thing lacking was her ability to literally get into the crowd and sing with us, sweat with us, and full on go crazy. But that was the venue and it was not a deal breaker, we still got classic barefoot Beth! 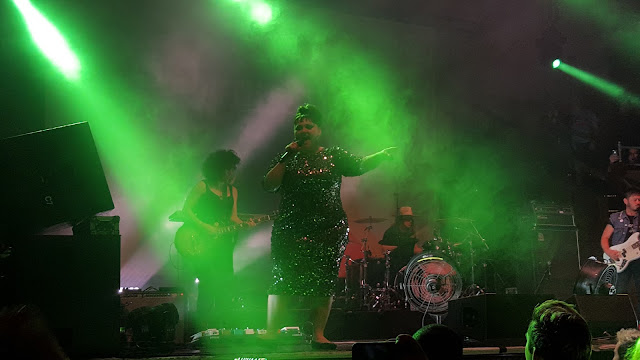 Moving away from her solo song such as Oh La La and In and Out we were treated to some Gossip classics, which needless to say tore the house down... Love Long Distance, Heavy Cross.. and in the encore Standing In The Way of Control - the defining song for  Beth/Gossip for me, well they all are but that's so punk it's awesome.

We also got treated to A Little Respect and a rendition of We Are The Champions too which was good!  Shout out to her band who were all amazing too.

Overall best in a long time, and to be seen again and again. 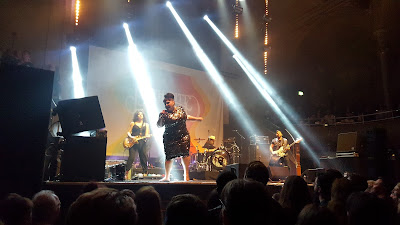 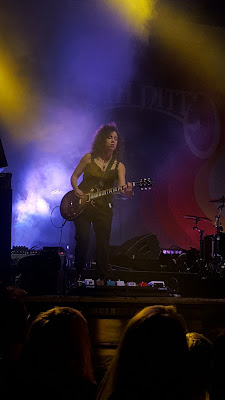 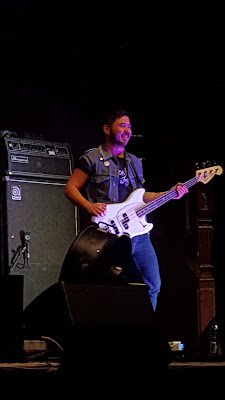 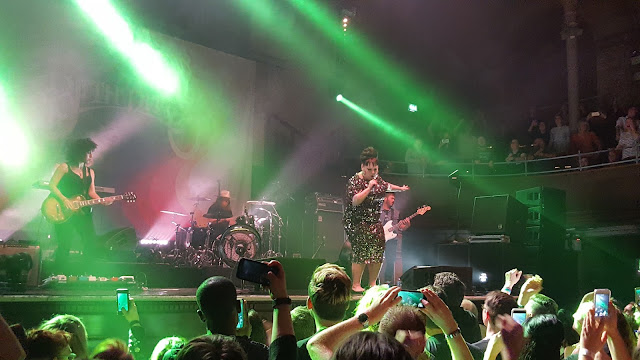 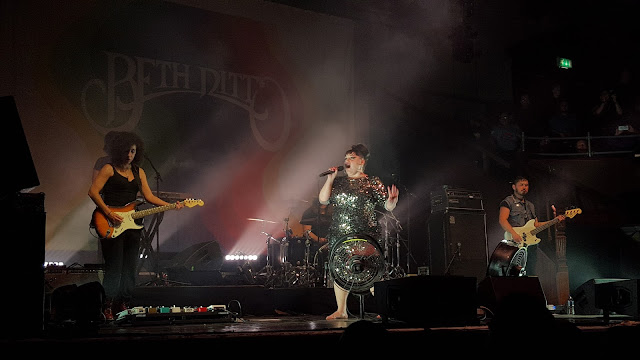 Here it is Placebo in Manchester again, it feels like they've been touring this 20th Anniversary for 20years. Not that I'm complaining, I can watch Placebo over and over - as I have, this is my 7th  or 8th time.

I came across Placebo by happenstance in 2002, when turning up at a friends house a skatevideo was on in the background. I always remember this as Mark Appleyard Flip Sorry - thats when I heard "My hearts a Tart your bodies rent, my bodies broken yours is bent". Instantly I was in love with the style and sound Brian and Stefen (including the 2 Steve's) created... and continue to create and, nichely, redesign.

It is this niche redesign that truely places Placebo as 1 of my favourites live. The abilty to take the entire back catalogue and peform it differently, perfectly different everytime. Extremes of this adaptation can be seen in the Acoustic Angkor Wat concert.

Admittedly I can see why many versions may be frustrating to fans who love singing along in time. I love watching Interpol play their songs like it's straight off the album, great, predictable and perfect. But I love the adaptions Placebo can create.

Back to the task. Opening with a Video of Every Me and Every You, then the guys came out... Stefan first followed by Brian, kicking into Pure Morning 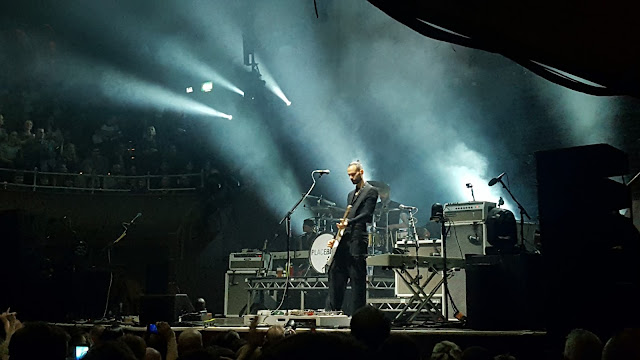 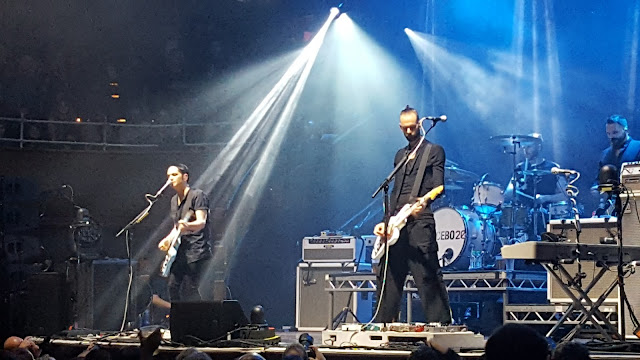 As usual Placebo were amazing and perfectly performing as I professional and in time.

Unsually for Placebo they stopped early into the 2nd song, asking for everyone to put camera's down. The tour so far has been in Arena's so this time it was a much smaller intimate gig, and they wanted everyone to be in the moment, which certainly happened. Although it didn't stop some.

This kind of put me off, but I understood it. As someone who loves to take the odd picture for my blogs and for memories I was a little upset, however given Placebo have had issues with people streaming their gigs online, as well and their obvious anti-socialmedia society we have become it make sense.

Back into the song they stopped again and threatened to have people removed,  I couldn't figure out if this was Brian have a joke. Although today he didnt see his usual self, there wasn't much talking and joking between songs.

The gig itself was amazing performance wise, with a 21 song setlist of the best of the best from their 8 albums. With a very emotional Without You Im Nothing - at times audience members crying during it.

I did take a snap of  Trump video they had which made me laugh. Although the security staff did tell me off for that 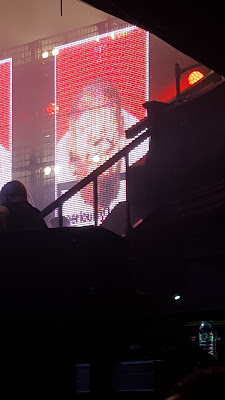 Loving Placebo, Brian and Stefan it was always going to be the best.

I took few other pics right at the end, as they took their final bows. 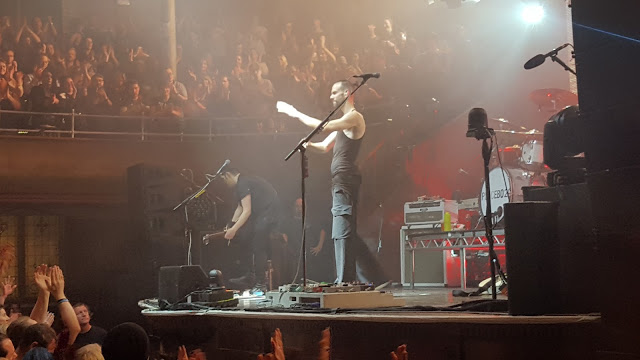 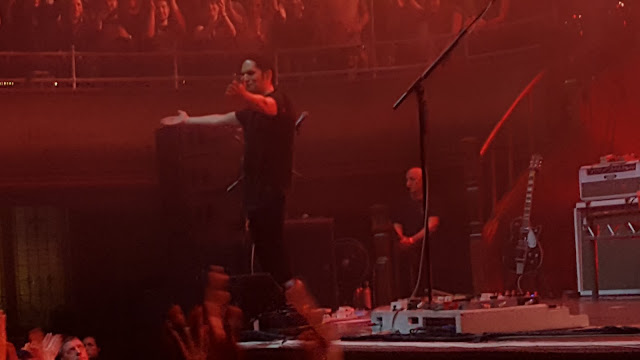 If you love Placebo check out their other bands/projects