Well! It's been a while since something was posted here, we're active on socials and as you may know we created a Podcast (www.mindcassettes.com) were you can listen to us talk about music under various scenarios. It's become a regular creative bubble full of enthusiasm. It's certainly a lot easier than sitting and writing, even though it takes 7 hours to produce, that says a lot about writing!

Out of interest these are the Episode's we've done. Episode 9 to be released in week or 2 (lockdown considered)

During preparation for Tony Hawk episode this band kept showing up on my feed, call it coincidence or targeting marketing, either way I kept seeing them! Then I heard their song in THPS last week and it all made sense! But they are awesome, 100% the best thing coming out of American right now!

If you like punk, check out this modern twist on vintage pop/skate punk! 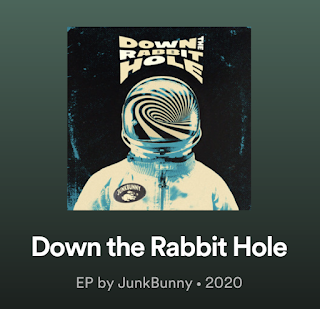 Is Brighton full of noisey girls and loud guitars?

A year or 2 ago we featured Yonaka on this very blog, who have grown and grown. Blood Red Shoes, Black Honey, even The Go! Team are all from Brighton. However, A new fighter has joined the game, and it doesn't sound like they are content with following in their footsteps. ADALIA come from Brighton, but they are looking to carve their own path. Actually, they are looking for World Domination, more on that shortly...

In 2018 they hit the scene with a 5 song grunge-pop EP, 'Stray Hearts', with dirty guitar riffs and moody lyrics, it's clear ADALIA drew their early inspiration from across the pond. Stand out track 'Royals' channels bands like Dead Posey and Flyleaf, whereas 'The End's is an atmospheric ballad and a real showcase of singer, Corey Plant's emotional vocal range. This is a band that isn't afraid to dip between genres to put their message across, and they are about to make their biggest leap yet. 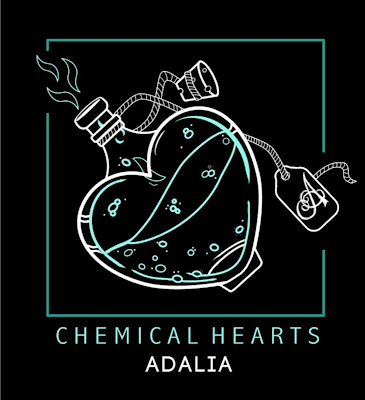 In a few days, ADALIA will drop a brand new single, 'Chemical Hearts', and we were lucky enough to get a sneak preview. A familiar intro quickly makes way for a burst of energetic-emo-skate-pop-punk! If 'Stray Hearts' tells a story of a band being backed into a corner by an unforgiving world, 'Chemical Hearts' has them bursting out of the corner, armed with a fresh attitude and a middle finger! Just like the emo-superstars they take their name from, this new confidence really suits them!


I had the chance to speak to Corey about the upcoming launch, and a few other things:

ALOMR - Hello. Thank you for chatting to us. Would you mind introducing yourselves to the readers?
ADALIA- Why hello there, I’m Corey Plant, the lead singer of ADALIA, a collision of Brighton-based, misplaced misfits serving alternative rock madness with a quirky twist. Now taking their first steps towards world domination. On guitar, we have the wonderful Sam Cotton and on the drums, equally as lovely, Jordan Hart. 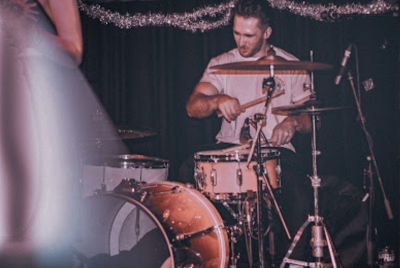 ALOMR- I recognise the name Adalia from Chicago Superstars 'Madina Lake', is that a coincidence, or are you fans of the band, like me?
ADALIA- Hey, someone else who appreciates their genius as much as we do! They are such an underrated band, aren’t they? Yes, the name originally comes from them. A few years ago I was fortunate enough to interview Matthew Leone (creator, bassist) about the world of Madina Lake, the whole concept that forms the band’s foundations, specifically Adalia’s origin. As we talked about everything she stood for, something just aligned. Whilst our ADALIA isn’t a replica of, or even a direct reference to theirs – the only thing they really have in common is the name – the principles surrounding who she is are very similar. It was the perfect name that represents everything we stand for as a band.

ALOMR - Wow, what an honour. I am really into their earlier work, I'm pretty sure I still have 'From Them, through us, to you' on CD. Any other influences?
ADALIA- I think that one of the best things about us, as a band, is we have so many different influences as individuals that we all draw upon when we write. Jordan is addicted to New Release playlists but is a fanboy for bands like Don Broco. Sam is the ultimate pop-punk guy with a not-so-secret-love-affair with pop. I grew up on classic 80s hair metal but am infatuated with gothic/emo piano ballads. I’m fascinated with concept records and bands, so take heavy influence from writers such as Jim Steinman (another highly underrated writer), Madina Lake, Andy Black etc. From that, you have the strange concoction that is ADALIA.


Ultimately, as a band, we take a lot of influence from bands such as Madina Lake, obviously, The Pretty Reckless, You Me At Six, Juliet Simms, Joan Jett & The Black Hearts, The Maine. There are too many bands to name, but those tend to be the ones that pop up when looking for inspiration when writing.

ALOMR - We love the new single! It's out in a couple of days. It seems to have a pop-punk, summery vibe to it. Tell us about the song.
ADALIA- Thanks!
Yeah it’s a slightly different style to our usual - I mean it’s closest relative is probably ‘Victorious’ from our debut EP ‘Stray Hearts’ - but even then ‘Victorious’ has a slightly darker undertone. We constantly kid that ‘Chemical Hearts’ is one of few of our ‘happy’ songs, as usually, we're those angsty post teens commenting on the state of our worlds through a slightly cracked lens. We wanted to write something different. A pop-punk anthem for the lost souls, who are tired of pretending, tired of trying to fit in. It’s about chasing a feeling, something you can’t quite define, but knowing that it’s the thing you’ve been waiting for. It’s the transition of figuring it out to letting go - embracing it and grasping ownership of your true colours. 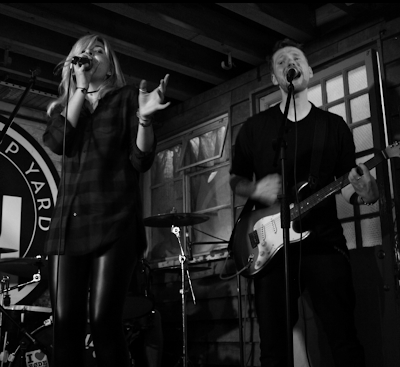 ALOMR- How has the Coronavirus lockdown affected you? It must be hard on a band trying to make a name for itself, especially when launching a new single?
ADALIA - It’s weird. In some ways it’s really hard. We can’t lock ourselves away in a rehearsal room to write and experiment. We can’t play live. Which is killing us slowly, as there’s something about the live experience that can’t be described. We’re really missing that interaction. As you know the music community is something truly spectacular. We’ve had to cancel a lot of gigs which would have been perfect to really push these single launches. We’ve just started making a name for ourselves and that’s been put on hold.
But, on the flip side, this pandemic has opened a lot of opportunities. It’s forced us to look at our brand and our social media presence. Socials are such huge platforms that help everyone stay connected, so we’ve recentred our thinking. World domination can’t just happen in the live scene, after all! This has also meant a lot of people are looking for new bands and releases to break up the monotonous redundancy of the lockdown life they’re stuck in. People who would usually just listen to whatever playlist Spotify throws at them that day, are now actively searching. That and the community is more supportive than ever for emerging and new bands. Every cloud has a silver lining right? This seems to be ours.

ALOMR - World Domination!! You talk a lot about that. What are your plans after the lockdown, and what's in store for ADALIA in the future?
ADALIA - Okay, that question just immediately made me think of the kid’s cartoon ‘Pinky & The Brain’, “Pinky: Gee, Brain, what do you want to do tonight? Brain: The same thing we do every night, Pinky - try to take over the world!”


ALOMR - Brilliant!
ADALIA- In all seriousness, we love playing live. At this point, we just want to get back on stage and play. Ultimately, we want to share our music worldwide and have the chance to tour new cities and continents playing the songs we adore to new and familiar faces. We want to make a difference in people's lives. Be a band that someone can fall back on, escape with and use to help them fight their darkest moment but also be their anthems for their ultimate highs.


In the near future, as you said we have a new single being released June 12th, our first in 3 years, which we are super excited about as it’s a personal favourite to play live. Following that, we have another single ready and waiting. But we’re just itching to get back on stage to try out some new material we’ve been working on during lockdown, as that’s where we belong!


Be sure to check out the new single as soon as it drops. Check back here on June 12th.
In the meantime, go check out ADALIA on Spotify, and go show the band some support over on Instagram, Twitter and Facebook.


We would like to thank them for taking the time to talk to us, I'm sure this won't be the last we hear of them. World Domination!!

Ok I've stopped counting months for my new music! I've lost track of days months and years right now. How is it June already?
Anyway, this week we revamped the website. It's minimalist, on brand and now with better links to our content and our new Podcast MIND CASSETTES. Of which were going to start mentioning new music on aswell. 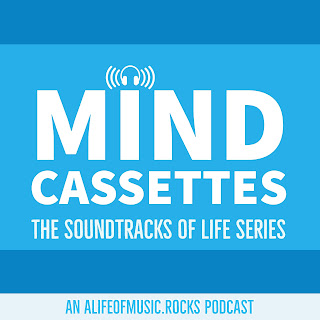 We also created a few new accounts for sharing music better, included a proper ALOMR spotify account were we have begun moving our Playlists too.
As for playlist here's the latest new music in our world;
Joesef - The Sun is up Forever
Gurba - Saw You There
Lyerr - Ride Our Luck
Creature Creature - Broken Windows
Peach Luffe - Rollercoaster
Bugeye - When The Lights Go Out
Elucidate - Everything, Always
Edge of Desire - Explicit
Just Tommy - Play for Likes
For now,
Mx
By MxG - June 04, 2020 No comments:

ALOMR favourites and Yorkshire's very own, Ables Army have just released a goodie bag of tunes on Bandcamp.
Compiled of, you guessed it, old songs, that they no longer play live, with a couple of alternative, early versions of songs they still do. This collection gives us a glimpse into the Huddersfield trio's early days, with songs they recorded at home. 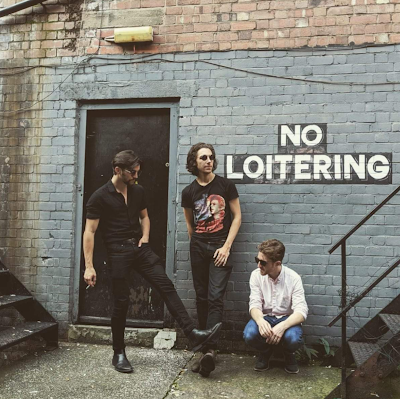 Not as raw as you'd expect from what is essentially a "Garage EP", the band's soulful, shoegazing swagger is evident, a blueprint of the throwback Rock n' Roll they would go on to produce in last year's brilliant EP, God Won't Let Me Stop.


My personal highlight comes from track 3, britpop sounding "Toluca To The North", with a catchy chorus blaring between foot tapping verses. I also enjoyed the very well placed scream on track 1 "Something New". It's always quite nice joining others as they take a trip down memory lane, and that is essentially what has happened here. For the rest of us, we have some great little songs we normally wouldn't have been able to hear before. 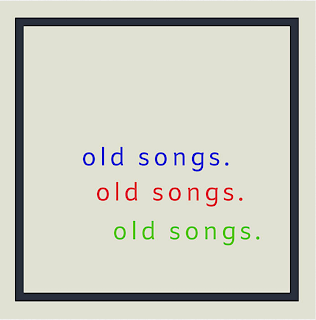 Old Songs by Able's Army is available now on Bandcamp, where you can name your price. Also, be sure to check out God Won't Let Me Stop on Spotify, and give the lads some support over on Instagram and Facebook.
By Mr Foxon - May 28, 2020 1 comment: